NAWA Technologies has announced that it will begin mass-producing carbon nanotube based ultracapacitors.  Compared to lithium batteries, ultracapacitors are capable of near-instantaneous charging and discharging.

It was these characteristics that led us to select this technology, in our novel In The Shadow of Ares, to power various devices on a future Mars, ranging from mobile agents to the autonomous “diggers” (mining robots).  More specifically, it was the near-instantaneous discharge of huge quantities of energy that made them particularly appealing.

Although the 2019 versions of ultracapacitors have shortcomings (low energy density and high leakage rates compared to lithium units), it is rewarding to see the technology we described a decade ago reach mass production.

So what say we buy one, bring it to full charge, and see what happens when we damage the charge regulator?

Someone is now marketing something we proposed in In the Shadow of Ares:  robotic solar panel cleaners.  I received information on these via an email brochure from Sentro Technologies USA (unfortunately information on theses robots is not available on their website).  These devices are certainly something my employer, a significant developer and owner of renewable technologies, would consider for our larger solar arrays.  Here are two images from the brochure:

The first runs on a rail, much like we envisioned when we had Amber engaged in her chores, cleaning dust off solar panels because the robot wasn’t functioning.  I find the second autonomous, mobile unit more interesting.  The engineering challenge would be to get it to move from array to array, especially where those arrays have tracking systems and vary in tilt and orientation relative to one another.

The topic of directed panspermia found its way into a recent issue of The Economist:  Colonizing the Galaxy is Hard. Why Not Send Bacteria Instead?

The concept, apparently being discussed by “a number of scientists”, involves jump starting evolution on exoplanets by seeding them with terrestrial bacteria.  With human interstellar travel likely centuries away, the proposal is to send tiny probes–containing microscopic passengers–in the near term.  These could be propelled using solar sails and Earth based lasers, along the lines of what is proposed for use in NASA’s Starlight (also known as “DEEP-IN”) program. 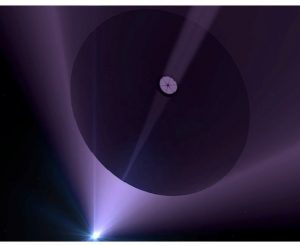 The article presents valid objections to this idea, including the worry of contaminating worlds were life might have arisen independently.

However I see a more practical reason for opposing such efforts.    Directed panspermia of this nature is being discussed because it is all we have the potential to do near term.  But technological advances over the next two centuries are likely to expand our capabilities greatly, including the ability to send larger, more capable exploratory craft and perhaps even human crews.  Sending smaller craft now, at best, provides a head start of a couple of centuries on an evolutionary process that is likely to take hundreds of millions or even billions of years to produce anything significant, assuming conditions are ideal.  That hardly seems worth the effort or risk.

When it comes to seeding life in distant solar systems, the sensible thing to do is to wait until we can do it responsibly.  Just because we can do it in the next few years, doesn’t mean we should.

Apparently the folks at JPL have been playing with the Mars Odyssey Orbiter’s THEMIS camera, pointing it toward Phobos.

Starting Monday November 14, The National Geographic Channel is airing a 6-part miniseries about the first human mission to Mars in 2033.  You can set your DVR and wait, or watch the first episode on-line now, in addition to related digital shorts.

Based on my initial screening it appears to be a mix of documentary–including interviews with the likes of Elon Musk, Robert Zubrin and Andy Weir–and dramatization.

Robert Zubrin was quick to post some suggested improvements to Elon Musk’s recently announced Mars plans (quicker than I was to post this follow-up):

The key thing I would change is his plan to send the whole trans Mars propulsion system all the way to Mars and back. Doing that means it can only be used once every four years. Instead he should stage off of it just short of Earth escape. Then it would loop around back to aerobrake into Earth orbit in a week, while the payload habitat craft with just a very small propulsion system for landing would fly on to Mars.

Used this way, the big Earth escape propulsion system could be used 5 times every launch window, instead of once every other launch window, effectively increasing its delivery capacity by a factor of 10. Alternatively, it could deliver the same payload with a system one tenth the size, which is what I would do.

So instead of needing a 500 ton launch capability, he could send the same number of people to Mars every opportunity with a 50 ton launcher, which is what Falcon heavy will be able to do.

The small landing propulsion unit could either be refilled and flown back to LEO, used on Mars for long distance travel, or scrapped and turned into useful parts on Mars using a 3D printer.

Done in this manner, such a transportation system could be implemented much sooner, possibly before the next decade is out, making settlement of Mars a real possibility for our time.

Reuters reports that SpaceX apparently plans to send an unmanned Dragon capsule to land on the Martian surface as soon as 2018. 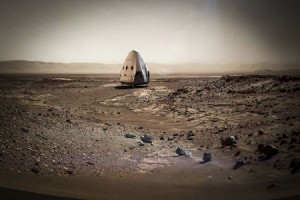 We’ve landed numerous craft on Mars, and this wouldn’t have capabilities that have made robotic explorers so useful.  However, it would be the first designed to bring humans to Mars, quite a milestone.  While the company has indicated that it doesn’t intend to provide details on the program until September, there is some very interesting potential .

Besides demonstrating the descent and landing technology, the mission could add greatly to our knowledge of radiation exposure and the long term performance of life support systems without a team of highly skilled (and motivated!) mechanics in the loop.  I wonder if the mission could include a simulated crew, consuming oxygen, expelling CO2 and other waste.  Of course the Dragon craft wouldn’t be the only habitable volume for the six month trip in a manned mission, but any opportunity to test systems under challenging, real-world conditions would be welcome.

Fans of big budget, cheesy Sci-Fi will be glad to learn that the first trailer is out for Independence Day: Resurgence.  It’s due in theaters June 2016, and picks up 20 years after the initial attack.  My personal hope is for something more serious than the original.  Roland Emmerich returns to direct, although he and Dean Devlin only get a character credit.  The screenplay is by Carter Blanchard,  James A Woods and Nicholas Wright, all with paper-thin writing credits so it’s hard to know what to expect.

Anyway, the official site has some interesting backstory details that had me intrigued.  First is the alternate timeline.  Picking up in 1996, and anticipating an eventual return by the invaders, the surviving Earthlings have adopted the aliens’ technology and have been preparing.  Apparently we have a Moon base and also bases on Mars and Saturn’s moon Rhea.

Additionally, there is also a reference to the impact of alien technology on consumer gadgets.  That sounded particularly intriguing at first, until I read the details that mention “breakout consumer products that were inspired by alien weaponry – including the touchscreen smartphone, bladeless fans, drones, and airport security scanners”.  OK, that’s as stupid as it is disappointing.

Still, I’ll try to reserve judgment for the final product.  As much as I am hoping for more realistic science fiction like what we were recently treated to with The Martian, I don’t mind the occasional alien shoot-em-up.

That may be a bit premature, but apparently Phobos will be pulled apart by Mars’ gravity in about 30 to 50 million years.  New findings were announced by NASA Goddard scientists November 10.

Phobos’ grooves, long thought to be related to the enormous impact that created Stickney Crater, may actually be due to deformation from tidal forces.  These “stretch marks” may indicate that Phobos is not solid, but rather is an aggregate of rubble surrounded by a thick layer of powdery regolith.  This would make it easier for tidal forces to fracture the Moon.

These findings, if accurate, could present interesting challenges and opportunities for astronauts visiting the moon for exploration, mining, or setting up a base.  Phobos will figure prominently in Ghosts of Tharsis, our upcoming sequel to In the Shadow of Ares.

A renewed international space race that many have been hoping for appears to be on the horizon.  NASA has announce plans to send humans to Mars, and now Russia has announced it intends to send humans to the Moon by 2029.  It has also been reported that Russia is in talks with China to collaborate on a Moon base.

Anything that gets us beyond LEO is a good thing, as long as the Moon doesn’t become the ultimate goal or a significant distraction in getting us to Mars.